Putting Together a Strong Chairing Team

Putting together a Model UN conference is a huge undertaking and you want to do it correctly. To do this you need to make sure that the little details do not fall to the wayside. You want to be sure that the delegates who pay good money to attend your conference leave satisfied.  The most important part of that will revolve around their committee experiences and those will come down to their chairs.

You want to ensure the team you create to chair your committees is strong and knowledgeable. They have to understand that there are many levels to the Model UN game. Ideally, they need to know how to monitor, and evaluate, these levels. Will you have two Chairs for each committee or more than two? What are your Chairs’ strengths and weaknesses? Are the chairs paired together based on these strengths and weaknesses? Do you have enough manpower to create an ideal pairing in each committee?

To answer these questions and alleviate your anxiety, we have put together some guidelines to help you create the best chairing team that you can so that your conference will be successful. 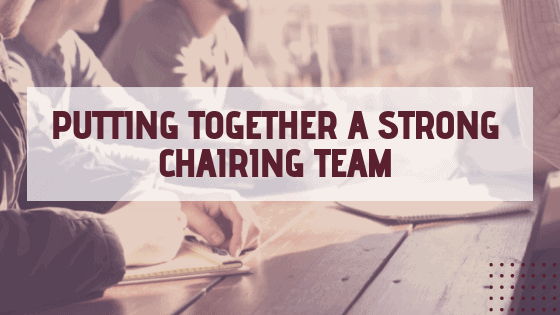 Why is a good chairing team important?

Bad Chairs can ruin not only an entire committee session but for many delegates also the entire conference. There are many reasons a Chair may be bad at their job. Maybe most of your applicants are first time Chairs. Maybe there is bad chemistry between a first-time Chair and the more experienced one you put them with. Perhaps a Chair is easily swayed by charismatic delegates. Maybe they don’t take notes or they leave to get coffee during the unmoderated caucuses.
Also, just because someone has Chaired at multiple conferences doesn’t mean that they are great at what they do. They can run into the same pitfalls, and have the same biases, as new Chairs.
Having good Chairs will greatly enhance the experience of the delegates attending your conferences. Good Chairs can ensure a smooth committee session where the delegates both have fun and feel their performance is appreciated. A good chair gives a conference a good reputation and will have attending schools wanting to come back year after year. Having three Chairs on a medium to large committee is be even better and having five or more is prefered for giant General Assemblies.
Having multiple Chairs observing the same committee will bring all of their skill sets together. They can complement each other. Having more than one Chair will also serve as an internal check in two ways. First, to their peers none of them will want to seem like they aren’t carrying their weight. Second, especially if they have delegates from their society or they knew from previous MUNs, they would generally be less averse to showing favoritism.
You could have one Chair who is an expert on the mandate and history of a certain type of committee, such as a GA, legal, UNESCO, or Security Council. Perhaps you have a second Chair who is especially good at facilitating debate or evaluating the delegates but lacking expertise on a certain topic. Pair them together. Create a team that works.

→ Always know the experience of your potential Chairs. Know which ones have chaired before as well as how many conferences they have attended. Know what committees they have experience with as well.While experience doesn’t insure that you chair is a good chair, it is an indicator that there are certain mistakes they are unlikely to make. Also, certain conference are known for taking a certain level of chair. The same goes for a chair who chairs an advanced room. Use that information what considering which chairs to select for your team and who to pair them with. When you have an even mix of experienced and inexperienced delegates, pair your Chairs together based on their experience levels. One of the biggest mistakes a conference can make it to put all the new Chairs together and all the experienced ones together.

→ One of the Chairs of each committee needs to be a stickler for the rules. In order for a committee to operate smoothly, knowledge of the red, and grey, lines of the rules of procedure must be known. Along with knowledge of the RoP, the chair should also be willing to follow the conference guidelines given by the secretariat. This means ensuring delegates get to lunch and socials on time, clean the rooms and returns equipment, such as extension cords. Answers to questions like these can be assessed during the chair interview.

Read of the room

→ Your Chairs should be able to see the text and the subtext of the delegates discussion. This is important. If a delegate feels they chair did not properly see the room, which is reflected by awards not mirroring reality, they will feel cheated.

→ All Chair will obviously be engaged in formal committee sessions, but what about unmoderated sessions and other less formal times? If a Chair disappears during an unmoderated caucus, they are missing the time when most of the lobbying and  resolution work is completed. This will result in them not being able to see who is doing what to accomplish committee goals. A Chair needs to understand negotiation and cocktail diplomacy so they can not only read unmods but can also recognize when work is being done after hours.

→ Model UN is a learning experience for everyone, even experienced Chairs. Ensure that your junior Chairs are mentored by senior Chairs who are aware that mentoring the more junior chairs is part of the process.

Ability to manage a rowdy room

→ Committee session can range in size, but they all have the ability to get out of control when a heated topic is being debated. Delegates can also feel a lack of attention and fall to the wayside. You need a Chair who will not allow this and will know both how to engage them and when to reign them back in.

Teacher as well as a facilitator

→ A good Chair will ensure that the committee operates smoothly, but will also recognize when a delegate needs some assistance. The Chair will be able to help them and clear up any misunderstandings they may have about the process instead of simply telling them they are doing something wrong. They will be able to give lessons to an entire committee and also to individuals both during, and after, the committee session.

Works well with other Chairs

→ All Chairs need to be able to function well together. They need to recognize not only their strengths, but the strengths of their fellow Chairs. This will result in a smarter work allocation between them and better results. When done well, they will use each other to ensure their committee is being operated appropriately.

→ It is important that you have good communication with your chairs before the conference. As you prepare for a conference, whoever you have in charge of Chairs will want a prompt reply to emails from the people they are managing. For each committee, you need at least one  Chair that will respond quickly so that any changes made can be addressed appropriately.

Expertise on topics and committee

→ Each committee is different and will have topics relevant to current global situations. At the same time, unless it is a specialized committee, a good chair  should be able to chair it without much more than the research they did when writing the study guide. For this reason the secretariat needs to insure that the chairs have enough knowledge on the topic to answer all questions the committees have. You do not want delegates who know more than your Chairs.

Ability to read a room

→ Chairs are there not only to ensure a committee operates smoothly, but to help new delegates. A good Chair will recognize a delegate that is having trouble and give them practice advice to improve.  Such suggestions can be given individually or to the committee as a whole. A good chair will know when to pause debate and interject.  A good chair will show them the proper way to do things in a way that won’t offend them, but will help them.

Can deal with power delegates

→ Good Chairs will know how to handle power delegates, particularly Ambitious Solo Players (ASPs). Delegates may have their own internal ways to handle ASPs, but a good Chair will also keep an open eye and intervene when necessary. A Chair be aware of the ASPs conduct so they can factor that into their awards.

Managing your chairs during the Model United Nations conference

After the conference started and the chairing begins, you are still responsible and can still influence the chairs and the committees. While a good chair should be left to auto pilot, mid level chairs may need ocasional suggestions and comments throughout the conference. Walk between the committee rooms, observe debate and ask delegates for feedback. Chairing disasters have been mitigated thanks to awareness and action at the right time.

A story from an Under Secretary-General of chairing:

From the first chair briefing first day of the conference I saw that the two chair of the African Union were not getting along. I thought this friction could be worked out but in the middle of the first committee session I was informed that they had dated a year before and were not able to keep it professional. While I was upset that no one had told me and neither had mentioned it in the interview. However, the conference had started and something needed to be done. I went to UNESCO, where the Vice Chair was experienced and I asked him if he’d mind switching committees. He said he didn’t know the topic but he would do what the conference needed. I moved him to African Union where he chaired alongside the former girlfriend, who had more knowledge of the topic. The male chair was sent to UNESCO. That evening both African Union chairs thanked me for my solution.

As seen in the story above, it is your right and job to check up on committees. You can give chairs suggestions, and if needed, clear orders, of what to modify to make the committee go more smoothly.

Additionally, you can use the MUN chairs briefing at the end of the day to hear from the chairs how the day went. In many cases they will have critical observations on their own performance as well as suggestion on how to improve.

The chair briefing can also be a place for you to give general feedback and guidelines to everyone without singeling any specific chair out. As the organizer you have many tools at your disposal to make sure you get the most out of your chairs. Use them wisely and you will have an academically strong conference with happy delegates.

Chairing a Model UN conference is an honor and should be taken seriously. In our article, How to Chair Like a Pro, you can see just how much Chairs have to do. When choosing your Chairs, do your best to make sure they work well together. They need to be able to handle their committees and topics as well as a wide range of delegate personalities. The committee experience will make or break your conference. Don’t simply trust that just because you did everything else correctly that the committees will operate normally. Every aspect of the conference is in your control, including who you put in charge of the committees. Walk between the rooms, get a feel for how your conference is going. It is true that a good chair makes the committee but it is a good secretariat who make sure that the right chairs are chosen for the job and supervised to make sure they do so.