Chairing at a Model United Nations conference breaks down into four main responsibilities, running the software, conducting the debate, choosing the awards and giving feedback. Giving delegates feedback, though often required, is not mandatory at every conference. However, the opportunity to hear from someone who watched every action and word, for anything from two days to a week, can bring many beneficial tips, observations suggestions.

While seemingly self-explanatory, software management doesn’t mean that the respective chair stops listening to the debate or taking flow (taking notes of what delegates say or what is done in the room). A good chair can, alone, manage the debate, run the software and taking flow on paper of their laptop. A way to practice is, when running the software, to take shorter notes, leaving the main note-taking to the other chair. 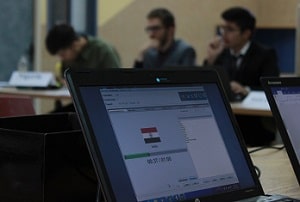 Awareness
I use the term conducting because the management of the debate alone can be very technical. A Model UN room has a life and rhythm of its own, like a symphony, and the chair needs to feel the room and where every delegate is at. The chair needs to strike a balance between keeping the more proactive delegates engaged while not letting the more quiet ones fall behind.

Commonly seen in chairs is when they ask if anyone didn’t yet speak and giving them the floor. Less common is when a chair, during a moderated caucus, give speeches to representatives from either side, instead of taking a speech and, 10 speeches later, giving the floor to the delegate who should have responded at the time. This doesn’t mean one should give preferential treatment to any specific delegate but to facilitate debate, and best manage the room, awareness is key.

Drop expectations
Before the first opening speech, and even before reading position papers, a good chair needs to separate themselves from personal bias, expectation and most importantly the debate they were hoping to see when they wrote the study guide.

As chairs, the topic of the simulation is sometimes chosen or imposed by the secretariat. Other times we get to choose the topics and it is the topic of our dreams that we have been waiting for months to see simulated in front of us.

A Model UN story of Crushed Expectation
A Turkish Model UNer came out of retirement for one conference per the request of the Secretary-General, was on the condition that he could run a Historical Security Council to deal with the Turkish invasion of Cyprus in 1974. The excitement from running his dream scenario, on the first day of the conference, quickly turned into the end of day meetings and lunch breaks filled with colorful statements like “Those #^$%! They are getting it all wrong! Don’t they know history?!? The United Nations Buffer Zone in Cyprus wasn’t created like that? Why are they negotiating a complete withdrawal!?? What is wrong with these people!”

We need to remember is chairing is about the delegates, even if the debate is a bad debate (or a non-existent one) and very far from the simulation we wanted or expected. We need to chair the room we are watching, and award the best delegates in the simulation as it played out, no matter how off topic it is or how much we wish it were otherwise.

Be open to varying styles

Delegates have different delegating styles, as well as different speaking styles. Some of these styles might be “too aggressive” or “lack backbone”. As chair, you can let the delegates know what the norm should be but consideration should be given to those who might have an effective delegation style which is simply different from what you are used to.

Also, in a diverse Model UN room, you will have different accents and norms, which don’t necessarily mean rudeness or disrespect. For example, some Italian of American delegates speak louder in a more animated manger which could be seen as overly assertive. This should that doesn’t make them less important to listen to. Also, the use of slang, as long as it is not person, is not inherently bad. A delegate should not be judged unfavorably just because they don’t act like a reserved European bureaucrat or salesperson style lobbyist.

What to do during the debate

Take notes
As a chair one should never count only on memory. Whether on laptop or paper, a short summary of what the delegates say will be very useful to measure the quality of the content as well as tracking ideas, measuring who contributed the most and to how often.

Walking and listening
During unmoderated caucuses, any chair worth their salt watching the room. Unmoderated caucuses where the most important negotiations take place and to leave for coffee at that points misses what is actually happening in the room. This is where coalitions are managed and deals are made. What happened during the next formal debate is usually a direct result of this and of critical importance to evaluate who is the most effective diplomat.
To best keep track, I suggest taking a few notes of central things that happened after every .

At every Model UN, at least some of your delegates will be trying to curry favor with you. Whether it’s asking if you want a drink at lunch, spending extra time after session or dancing with you at the social, some delegates are playing the game at all levels.

This is not a reason to punish anyone, and many chairs would have done the same had them . The key is to stay objective and read the room you see matter how much you someone or want them to do well.

For most chairs it is fine to be friendly, have fun and engage as normal but if you feel distance is the only way to stay objective that is a tactic used by chairs as well. As Model UN is a game of diplomacy and influence do not forget that, as a chair, you are part of it as well.

Guide Delegates With Caution
A good chair judges the room they see and avoids telling delegates what to do but that does not mean they should never be proactive. Beginner committees not only need to be told something is off policy or a bad strategic choice but also be shown examples of what to do and how to do it well. Whether interpersonally or collectively to the entire room, advice and recommendations should be used when needed. A chair is not there to leave the room completely alone. A chair is there to facilitate good Model UN, which sometimes means taking a step forward as much as one takes a step back.

At some point, towards the end of the conference, the Secretariat will ask for awards. Sometimes the secretariat will give clear criteria. Sometimes it is chair’s discretion. What is always important is that the awards are given based on merit and the criteria remain consistent between the delegates. 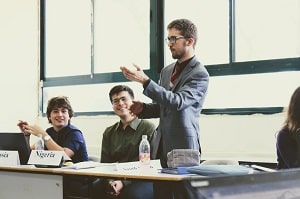 Examples of criteria used by the chair to decide the best delegates:

All of these, and fall into three main categories of measurement:

Many chairs use some, or all, of the above criteria to make the decision. The goal is to see who influenced policy most.

If a delegate gives a speech but doesn’t lobby, they will likely get no votes no matter how good the speech. If a different delegate repeats that speech from a different angle, builds a block and passes a resolution, they get the credit. If the resolution writer typed everything but didn’t bring any ideas of their own, or show ownership, they are clearly not leading the process.

Some chairs give credit for knowledge of Rules of Procedure or Decorum (politeness) but many others find that those alone to do drive policy and only make other more measurable attributes more effective.

When taking notes throughout the simulation, you should make note of the things you want to say during the feedback sessions. Feedback can be given personally or collectively to the entire room. When given collectively, care should be taken to not give away who received awards when showing examples of what was done well or poorly.

Here is a list of things various chairs do to give effective feedback:

Chiring at a Model UN conference is a sacred responsibility. Nothing can leave a bad taste in the mouths of delegates like seeing the wrong person awarded. For this it is critical to take notes, stay aware and have a serious discussion before choosing the awards. The discussion does not have to take a long time but should be as objective as possible with the goal of properly reflecting what happened in the room.

Chairing does not mean an end to delegating. It is simply another side of Model UN to learn and grow from, just as being part of a secretariate teaches about organization and logistics. The process of choosing good topics, writing study guides and passing chairing interviews are all part of our growth as Model UNers and in general. The key is to maximize every part of the Model Un experience and use it to do the others better. A good chair will be a more effective delegate, the delegate who has chaired and delegated will be a better chair and the better chair will do a better job screening and evaluating future chairs to staff their conference.

What is key when chairing is to pay attention to the delegates and reward their preparation and efforts during the simulation with respect. Just run the software effectively, conduct the room with sensitivity and care, watch the as closely as you watch the opening statements, take notes, awards those who deserve it, give good feedback and even have some fun while doing it and everything should be fine.