Short History of the United Nations 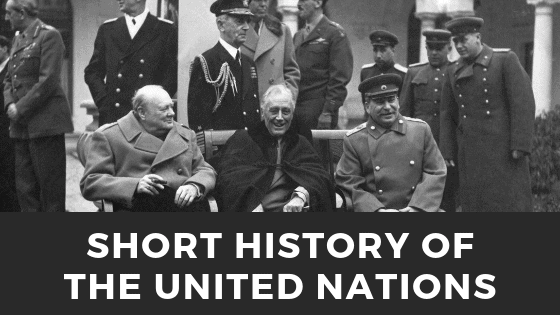 The United Nations was birthed during World War II, though it finds its underpinning in its predecessor, the League of Nations. The League of Nations was the brainchild of President Woodrow Wilson and his attempt to create a world free of wars. While the Paris Peace Conference ended WWI, it also created the League of Nations. The idea was to create a global body to bring nations together to diplomatically handle situations before a crisis arose. Ultimately, the League of Nations was a failure. Not only did the US not join due to push back from the US Senate, but the League did not prevent WWII. Much of this was due to the fact that the League decided that Germany was not allowed to join as a punishment for being the main aggressor during WWI. Due to their isolation from the global community, along with the requirements placed on them from the Treaty of Versailles, conditions were created that allowed the Nazi party to rise to prominence.

The UN was created with the same basic idea, but now there was more willingness among global communities for an effective union. The United Nations was born during WWII from a “Declaration by United Nations” created by US President Roosevelt and UK Prime Minister Winston Churchill. Twenty-six countries signed the declaration in 1942, with twenty-one more signing by 1945.

Throughout the years, the mission of the UN has altered to meet evolving global challenges. Immediately following the end of WWII, the UN had to deal with the weakening of many global powers. Europe was in the process of being rebuilt both economically and physically. As a result, they were losing control over their colonies in Africa and Asia. The process of decolonization was heavy in the 1950s and 1960s. Most notably, India gained independence in 1947, quickly separating along religious lines to create Pakistan. Israel was born the following year which started a continuous string of conflicts that has continued to today. Most importantly for international dynamics at this time was the beginning of the Cold War in the immediate aftermath of WWII.

he Korean War was the first evidence of a true Cold War between the democratic West and communism and would create a common theme in global affairs for the next forty years. During the Korean War, fourteen UN nations joined the US in pushing North Korea back across the 38th parallel, where the border stands today. This marked the first military involvement with major UN cooperation. The Vietnam War was a continuation of the Cold War theme, lasting over ten years. This time there was not a major agreement among UN nations, thus no collective military engagement.

The United Nations has been credited with some major success throughout its existence. The eradication of smallpox was led by the World Health Organization, a UN agency, and is seen as one of the greatest medical achievements in history. The goal of eradication was accomplished thirteen years after it began. Also seen as a major success for the UN has been its handling of nuclear weapons. In conjunction with the Nuclear Non-Proliferation Treaty, the UN has assisted South Africa and Kazakhstan in relinquishing their nuclear weapons. Through the UN’s International Atomic Energy Agency (IAEA), the UN continues to monitor global nuclear power. No nuclear weapons have been used since 1945.

The end of the Cold War fundamentally shifted the importance of the UN as the international community shifted from the two power world of US and USSR dominance to what many considered a single power world. Globalization was beginning to take place with huge advances in technology such as the internet and improved transportation. Since the end of the Cold War, the UN actions have been dominated with peacekeeping efforts, dealing with Iraq, and handling growing threats of global terrorism, and humanitarian efforts.

In September of 2000, the United Nations embarked on an ambitious agenda to solve some of the most pressing global issues. Global leaders convened the Millennium Summit which produced the Millennium Development Goals. With a deadline for completion of 2015, the MDGs outlined eight tasks to accomplish: eradicate extreme poverty and hunger, achieve universal primary education, promote gender equality and empowerment of women, reduce child mortality, improve maternal health, combat HIV/AIDS, malaria and other diseases, ensure environmental sustainability, and spur global partnership for development. There have been many successes in the program, though progress has been uneven across the globe. The UN recently created a Post-2015 Development Plan to clarify and continue the work. The article titled Millennium Development Goals and Sustainable Development Goals examines them both in depth.

The United Nations is often criticized for having no real global power. The UN relies on the states that make up the body for funding and resources. Nowhere is this clearer than when it comes to peacekeeping and security missions. The UN Security Council has often passed resolutions calling for peacekeeping forces, though it must rely on the military contribution of member nations. It has provided military peacekeeping and police forces for many operations, some of which are listed below:

As soon as Israel declared independence, it was attacked by four surrounding nations. Israel defeated the nations after ten months of fighting and the UN provided peacekeepers in the aftermath.

Israel invaded Egypt in order to gain control of the land surrounding the valuable Suez Canal. The UN used a peacekeeping force to supervise the withdrawal of troops.

As Yugoslavia began to break into many different states based mainly upon ethnic lines, disputes immediately broke out, some leading to ethnic cleansing. The UN has peacekeepers in place to assist with ceasefires and efforts at ceasing hostilities.

The UN sent peacekeeping forces to Rwanda to try and stem the horrific violence between the two main ethnic groups in the country, the Hutus and the Tutsis.

The Darfur region in Sudan has been in constant turmoil for over a decade and has seen periods of ethnic cleansing by the government against the region’s non-Arabs. The UN and AU have had joint peacekeeping missions in the area.

The UN was present with peacekeepers in this conflict which ultimately led to a split between the warring factions creating the new state of South Sudan.

Haiti has been through governmental and environmental turmoil for decades. The UN has been focusing on building and training a national police force for the country. The current UN peacekeepers have been accused of sexual violence among the population.

The UN Security Council approved measures to expel Iraq from Kuwait in 1991, which was accomplished in 1992. This was the beginning of a long decade of back and forth between Iraq and the UN dealing with weapons of mass destruction and human rights violations. In late 2002 the UN Security Council adopted Resolution 1441 which gave Iraq an ultimatum concerning disarmament. Despite the IAEA and UN weapons inspector, the United States and fifty other countries launched an invasion of Iraq in March 2003. The US claimed it was acting within the framework of Resolution 1441, though many other Security Council members vehemently disagreed. This incident has served to highlight the inability of the UNSC to reach a consensus on major military agreements.

As the United Nations moves towards the future, it will continue to struggle with challenges to its authority by member countries. Though the idea of a global forum is thought of as good by most countries, many face nationalist movements from within that strictly oppose losing any sovereignty to an international organization. Though it provides an outlet for many global initiatives, funding has and will continue to be a problem. The United States is the largest annual contributor to the UN and has continually threatened not to pay its dues in order to obtain favorable outcomes from the UN.

Video of a short history of the UN