How Model UN and BP Debate Complement Each Other

How Model UN and BP Debate Complement Each Other

Model United Nations and British Parliamentary Debate are both academic activities centered around discussing some of the most pressing issues of our contemporary world. Success depends putting aside your pre-existing biases and advocating for the position that you are assigned. Both activities have the capacity to open your eyes to a wider range of issues and viewpoints, and, if one puts in the effort, are immensely fulfilling in terms of awards and knowledge gained.

Though the formats are quite different, the fundamentals are very similar. Given this, if BP and Model UN are done in tandem, predictably you will have more success in both. Even though most people choose between the two activities, the skills learned in Model UN are easily transferable to debate, and vice versa. The following article is an analysis of why they are complementary and how to use these advantages effectively. 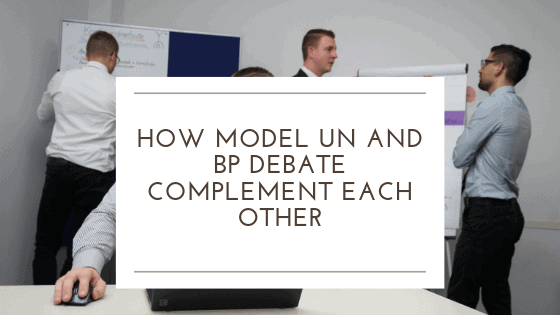 An Overview of BP Debating

While other styles of debating exist, British Parliamentary, or BP, debate is one of the most common styles internationally. For those unfamiliar with the format, each round involves four teams of two debaters each. After the resolution is announced, a certain amount of time (usually 15 minutes) is given for teams to prepare. Debaters are not allowed to consult the internet, or anybody other than their partner, and must rely on written resources or prior knowledge. This means that debaters must be well-researched and adept at thinking quickly.

During the debate round itself, two teams are “government” (arguing for the resolution) and two are “opposition” (arguing against the resolution). While the two government (or opposition) teams are technically on the same side, they must still try to beat all of the other teams in the debate by ensuring that their contributions to the debate are perceived as the most important. In order to accomplish this, teams must refute the other team’s case, solidify their own, and provide justification as to why they should win the debate. These techniques will be explained in detail later.

Participating in Model UN provides a shortcut to much of the research you would otherwise have to do as a debater; for example, you will have represented obscure countries and discussed a wide range of issues in committee, from civil wars to fiscal policy. This means in difficult debate rounds, you will often be better prepared than your opponents.

For example, in the resolution This House Supports the Political Reunification of Ireland and Northern Ireland, the average person would be clueless as to where to start. A delegate who has discussed Brexit in a European Union committee will be well-prepared and able to employ their knowledge. If that same delegate were to represent Ireland at some later conference, they would already be experienced in dealing with opponents’ arguments and possess a nuanced understanding of their country’s political history, drastically cutting down preparation time.

Debating and Model UN work so well together because most of the information you gather in each respective activity can be transferred to the other.

BP debate provides you with a more practical worldview. In debate, you are encouraged to look at issues from the perspective of marginalized groups; for example, both sides are likely to focus on impacts to racial minorities, instead of the wealthy, in a debate about American politics. While this may seem self-evident to a MUNer, it is immeasurably useful to gain a perspective through debate on how a proposed policy can affect the most vulnerable. The only frame of reference many MUNers have is through the lofty foreign policy objectives stated on a government website. Learning to think critically about the practical impacts of a call to action will make your plans in committee easier to defend, and better position you to attack others’ plans.

Moreover, statistics, facts, and lines of analysis from BP debates can be used effectively in moderated causes– which are, after all, essentially an informal debate. SInce BP debate is based more on logical reasoning than throwing facts or a call to action at your opponent (which is, unfortunately, what Model UN sometimes comes down to), it gives you the opportunity to explore more arguments within a debate than you would in hours of committee or research.

Here are some topics that appear quite often in both MUN and debate. I have found it very helpful to formally debate these topics before discussing them in committee.

While the previous section was a general overview of how debating can impact committee performance, below are several debating techniques that are useful in a MUN committee.

The Clash / Information / Call to Action format taught in the “How to Write the Killer Speech” guide on this website is a good general format to follow, but it is best used in opening speeches.

Especially in smaller committees where everybody gets more speaking time, follow-up speeches are often the most effective when they target a specific point instead of trying to cover all bases at once. They can make your own points are more immune to attack, or take down an opponent who is relying too heavily on one point.

When learning to correctly analyze a point, many BP debaters are taught the PAEL format:

Self-explanatory. One or two sentences stating what you are trying to prove.

Why is your point true? Use logic instead of facts here, so that your opponents have to do more legwork than just providing a counterexample to dismantle your argument. Keep asking yourself “why is this true?” every time you reach a new conclusion, until you have fully fleshed out the argument.

Empirical evidence (or a convincing hypothetical) to support your statement.

Now that you’ve proven the point, why does it matter? Does it disprove another delegate’s points? Does it prove that your call to action will work? etc. Make sure to explicitly state this connection, so that your point receives the credit it is due.

In BP debating, since debaters have about five to seven minutes to give a speech in each round, they must give multifaceted responses to opposition arguments. While MUN speeches are shorter, it is still possible to give good, detailed responses.

At one point or another, everybody is put into a situation in committee where they have to disprove another delegate’s points. Of course, counterexamples can be effective, but only responding with a fact is never the most convincing response. It will either go over somebody’s head or force them to choose which fact they think is most convincing– you should never leave any doubt in this area.

Here are some suggestions as to how to broaden your responses:

(eg. “peace talks worked there, why can’t they work here as well?”) without having logical proof as to why it will work. Therefore, when disproving a call to action, it is helpful to come up with a list of reasons why the two situations are different, and explain why this will lead to a different outcome. Things to consider:

Ensure that you provide reasoning as to why these differing situations mean that your version of events is more likely to happen.

How will people act?

Different people in a situation have different interests, and will act differently as a result. Often, a call to action has little chance of success because of the actions of an actor that was never considered in the formation of the call to action. For instance, it is useful to consider:

In BP, since there are four teams, it is necessary to “weigh” your arguments – to show that they are more important than other teams’ arguments – in order to win the debate.

In committee, you will have to try and sway delegates away from the other bloc and encourage them to vote for your resolution. Your opponents will always have something to say about your resolution as well, so you need to ensure that your bloc’s plan is always perceived as more important. Weighing is best combined with refutation. This skill is also applicable in agenda-setting speeches, because you will need to “weigh” one topic over the others.

There are two main ways that “weighing” can work:

A stakeholder is somebody who will be affected if a call to action is implemented. If your resolution and the other bloc’s focus on different groups of people (eg. different cultural groups, different countries altogether, or urban vs. rural areas), this type of weighing is important.

The goal here is to make it seem like the people that your resolution concerns matter more than the other people. For example, let’s say that in a committee about eradicating Malaria, your bloc is sending financial aid to the least developed nations, while your opponents are focusing on aiding the countries that are closest to eradication (i.e those that have the most funding).

The argument you should make is that the stakeholder you are talking about is the most vulnerable– they are the least able to fend for themselves, and malaria is more likely to spread quickly when there is little to no present infrastructure to prevent it. Therefore, helping your stakeholder is the most urgent.

When there is not enough funding, or if it is otherwise unrealistic to do both, often, a large point of clash between opposing resolutions is short-term vs. long-term aid.

If you are advocating for a short-term solution, you must frame the situation as something so dire that people will die/suffer greatly without immediate help; for a long-term solution, you must make the situation seem like one that is not necessarily urgent, but one that requires a sustainable solution, or else the problem will present itself again in a few years. In either of these situations, you should emphasize why the opposing solution will not solve the problem.

I have personally found great success using the skills and knowledge I have gained from debate in Model UN. Watching or participating in debates will make Model UN much easier, but if you do not feel like joining a debate team, then reading about a wide range of topics, and being prepared for any discussion topic, will be your greatest ally in committee rooms. While experience in one activity makes the other far easier to pick up, consistent practice is still the most important part of improving your skills.