The History of the First MUN

One small step for MUN

Do you ever wonder how the institution of MUN we simulate today came to be?

Many believe the first such simulation was held at Harvard University in 1923. Research shows that there was a previous political simulation. Let’s take a look back into the history of Model United Nations see where it all started. 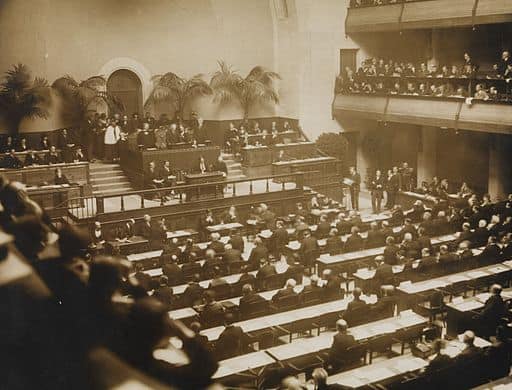 The first meeting of the League of Nations, 15 Nov 1920, in Geneva
Photo Credit: National Library Norway

Where Was the First International Assembly?

It is from the President of the first Oxford International Assembly, Mir Mahmood, Born in Amritsar, who travelled to Harvard in 1922, on a trip from New York.[4] This trip was made with the express desire to found more College leagues. On October 5th 1922, Mir Mahmood spoke at the Liberal Club in Harvard, urging support for the League of Nations, and undoubtedly convincing the Liberal Club to create the organization of a forum.

What was the form and function of the first International Assemblies?

Both International Assemblies reflected the same ideas, debating to find resolutions, and supporting the idea of dealing with international disputes around a negotiating table; still an uncommon idea at the time. Nevertheless, there were key differences between them that we will piece together to gain a sense of their beginnings.

We do not have records of the first Oxford International Assembly meeting, but we have detailed records from their fifth.[6] The first thing clear from both Oxford and Harvard is their use of two topics to begin debates, in the case of the fifth meeting, the Admission of Turkey into the League and British occupation in Egypt. The reason for this is not quite clear, as League meetings often focussed on several topics, but it is likely that owing to Oxford’s insistence that sessions be held in one evening (usually an hour of debate per topic) then two was selected as giving enough time to debate whilst not getting too overly complex. Indeed, despite Harvard’s attempt at a 48h session for their first meeting, this was scrapped for an evening of debating.

The debating too reflects far more than the British parliamentary style of debating, even in the 1920s, with a President (elected by the other delegates and one of the delegates themselves) calling upon other delegates to speak for a certain time, and taking motions by the delegates. Whilst not strictly comparable with League protocol, it does reflect the fact that the founding members of the Oxford International Assembly were also Oxford Union members, and thus understood this style of debating more easily. Harvard took the same approach for their first session too.

Resolutions were followed differently in the two sessions. In Oxford, according to their fifth session, delegates proposed resolutions as simple one or two sentence solutions, which were then debated and voted upon. The end of a topic came when enough resolutions were voted upon to deem the topic at hand solved. In Harvard, delegates seemingly voted at the end of debate on a list of resolutions, more reminiscent of the current system we have today.

Overall, the two original International Assemblies were vastly the same, noting that they were organised in the shadow of the same types of Institutions, the Oxford Union and the Cambridge (MA) Liberal Club. It is still striking how similar sessions from the 1920s are almost exactly the same as those today, with delegates representing countries much as students do nowadays.

I wish to end this article with a discussion on why these assemblies came about. As M. Mahmood’s speech at the Liberal club and the Observers article highlights, it was to spur the intelligent youth of the day to understanding and supporting the League of Nations, knowing that many would likely be vital to its continuation in the future. Whilst the league did not have much of a future, the sentiment continues to this day with Model United Nations.

MUN has been such a powerful force for good in these past decades, encouraging thousands into understanding the UN. To understand its beginning allows us to really get to grips with what MUN has become.