Interview with the team behind Game of Thrones Model UN!

This November 24th something very unique is going take place in Warwick. Game of Thrones Model United Nations, or GoTMUN is looking to be the largest, and most immersive, Game of Thrones simulation to date. GoTMUN is the brainchild of some of the top crisis delegates and directors in the UK and has been in the works since 2014. WiseMee found a few minutes to sit with this experienced and excited team to learn a bit more about the plans for Westeros this winter session. 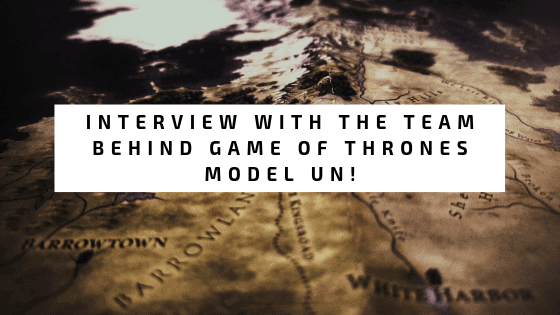 In three words – Game of Thrones! We spend MUN Crisis conferences plotting, maneuvering and judging our opponents. With that background, which of us can honestly say we didn’t groan when Ned Stark decided to confront Cersei with the truth, or which of us didn’t have a sneaking admiration for Tywin’s brutal negotiations with Olenna Tyrell? We all like to think we could have done better: now you get the chance to prove it.

To make sure fans will be familiar with the crisis we’ve set it in a period where all the major houses are present and swear fealty to the Iron Throne, all the institutions are recognizable, but when there is enough leeway in George Martin’s canon to ensure no one is given unfair advantage by being able to read up on all their opponent’s secrets

What’s going to be different?

Everything! For a start, this is a feudal system: you want to behead your bannerman without trial? Do it! You want to switch sides? This time you can take thousands of soldiers with you, possibly at a key moment (Lord Stanley at Bosworth, anyone?). You want to wage war? Just remember that you will personally be on the front line, it’s not just your career you’re risking. You can even challenge your enemies personally and take a chance in Trial by Combat.

One major factor in GoTMUN will be the loyalty of your followers. This is set in an age before nationalism, before the loyalty of a professional army could be taken for granted. Remember, most knights swear fealty to both their liege lord and to the crown: if a cruel and dishonourable Lord Tyrell raises his banners in rebellion against a good king, he may find many of his own knights joining House Targaryen’s forces. Equally, if a weak King fails to protect his people they may well be willing to back a strong challenger with a track record of military success.

Add to that the medieval aspects of diplomacy – a major summit means nothing but a strategic wedding may mean everything, and every noble delegate will have their own family trees – and it makes for an entirely different Crisis experience.

Why should someone choose this crisis?

Because you get to contest the Iron Throne through Fire and Blood. More than that, this is a major Crisis Conference: we’re running 8 cabinets or more, with up to 100 delegates, each with their own bio and objectives. No one is quite whom they seem, and everyone can change the course of Westerosi history. The delegate sitting across your cabinet table is as likely to kill you as those sitting in a hostile cabinet and the distinction between political and actual assassination is almost non-existent.

In addition, this Crisis has been a long time in the making, with the basis being in place as far back as 2014. Some of those who showed interest then are returning for this conference: it’s a chance for current MUN members to test themselves against some of the old school, to see if they’ve become rusty in retirement.

How can someone prepare for this?

The most enjoyable way you can – read the books and watch the show. In particular you could read the Dunk & Egg short stories by Martin, which are set a few short years before this Crisis. Alternatively, read up on how a Feudal Society operates and dig into the Wars of the Roses: not only did they inspire Martin’s work, they also showcase how brutal and fluid medieval civil wars could be.

We’re a quartet of experienced Crisis Conference Delegates and Directors with an obsession with history and a love of George RR Martin’s books. We’ve studied International Relations at a range of institutions and have crisis and MUN friends from all over Europe.

The conference wouldn’t be happening without Warwick MUN society: while the writing and directing is being done by others (meaning Warwick’s MUN veterans can be delegates themselves!), Warwick are hosting the conference and organizing the logistics and we are incredibly grateful to WarMUN for helping make this happen.

Who is going to staff?

The Crisis is being directed by four MUN veterans, all of whom have previous Crisis Management Experience. We’re also accepting applications for additional staff – with 100 delegates we’ll be running a lot of staff – so if you’d like to be involved behind the scenes you can apply to help now (more information on our “GoTMUN” Facebook page.

What kind of background do we have?

All four Crisis Directors are Graduates with degrees in Politics, History or International Relations – including two MAs in Security Studies, Diplomacy and Communications – and a strong love of both Crisis Conferences and Game of Thrones. We’ve also got a long list of Crisis Conferences under our belts range from delegating at WarMUN, OxiMUN and YorkMUN, to staffing at CUIMUN and ScotMUN to Directing at OxiMUN and LIMUN

There’s even real world political experience with some time working in the Palace of Westminster and one of our directors, Stephen Vanson, was Youth President of the United Nations Association UK (UNA-UK) 2012-13